Hi Rory, thanks for your time for this interview! Maybe you could give our readers a quick introduction to yourself.
Hi, I’m Rory. I tell stories for a living.

You’re an actress, director, producer and writer – do you have any formal training? What’s your most and least favorite position?
Yeah, I’m a classically trained actress and a self-taught writer/director. I like acting in other people’s things the most and I like looking for money the least. But truth be told, I’m a real fan of all aspects of what I do. The hustle/rejection gets old, but I love creating and I get to do it every day and for that I am grateful.

How do you find your cast and crew?
I generally cast from people I know or like and then just reach out to them directly. Friends or friends of friends.

You took both the leading roles in Safety and Traction respectively, while you also directed them. The results speak for themselves, but in retrospect, would you replace one of your positions with someone else, to focus entirely on the other? Why/why not?
Nope. I’m attached to everything I write, it’s why I started writing. I absolutely will not budge on that, or on having a certain level of creative control. That’s why I started directing. I have a vision and I know exactly what I want, so it’s more efficient if I just wear more hats because in the end I know I can make it happen.

In both movies, your role’s name is Andy. There doesn’t seem to be a greater connection though, so is it just a coincidence or does it has a deeper meaning?
Not a coincidence. Andy is me. Not literally, but she’s based on me … on the worst parts of me, that I blow up and turn into stories. Everybody sees those two characters as being vastly different, and I know why, but to me it’s the same girl. It’s a small detail that is in there for me and me only, but it’s cool that you caught that.

Your filmography seems focused on certain social issues, especially racism. Do you experience it in your own life or do you just look at society and say „that’s not right“?
I can’t think of anything less attractive than apathy … okay, I can. But you get my point. I give a shit, so it’s bound to show up in my work.

Did you ever get negative feedback for the ending of Traction? Did people interpret it as misogynistic („so women do only pretend?!“) or was the message generally received?
No … people seem to get it. The backlash for Traction has come from people who are very religious and offended by those jokes. I think there were some comments about Andy in Safety that came from guys about her being an unlikeable character … but I honestly can’t remember. I want people to like my work, but I won’t lose sleep over it.

While I obviously won’t ask you to explain your movie, I take Traction as a plea for free speech. Do you think jokes are just jokes or do we need some sort of humor police to prevent people from telling them?
Traction is meant to pose the question, not answer it. If that makes sense. Personally, I think there needs to be a balance. There are a lot of unfunny people, some of them very successful, making money off of jokes where the message and the punchline is at the expense of women/minorities and I’m not about it. That said, I don’t believe in silencing people, I believe in raising the bar.

Jake’s second „racist“ joke isn’t even racist, but more like a parody of racist sayings. Yet Andy is still offended. Do you think some people enjoy being offended just for the sake of it, even if it means ignoring facts? If so, do you think this helps in combating racism or does it more harm than good?
Hmm … I honestly don’t know. That’s probably a question for a sociologist. Personally, I think that there are people who will always find something to be offended by … but I’m a lot more concerned with the people who aren’t offended by the blatant injustices happening all around them.

Do you have any future projects planned?
I’m in development on a half-hour comedy with Crackle and a snapchat show with Comedy Central. Check out www.OnlyinHelLA.com to watch my web series …

If you could chose any movie in existence, which one would you like to have directed?
Clueless, duh.

It’s 2021, you receive your first Academy Award for Best Directing. Which person would you thank the most in your acceptance speech?
Wow, you’re really setting the bar here … gonna “yes and” you on this one: my daughter. Whaaaaat???

Thanks for your time, Rory! If there’s anything you always wanted to tell, now’s the time.
@roryuphold on twitter or @icouldbeblonder on instagram. 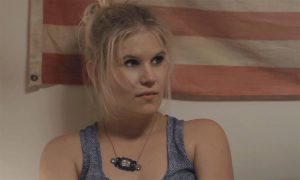